Mackenzie Tarvin is just one of 10 students chosen to be a part of the inaugural FIRST LEGO League team at Spring Hill Elementary. FLL is a nationwide organization set out to teach students team building skills, core values, and STEM. Students build a robot to code and program to do certain tasks that are worth points.

Tarvin spent time building the robot, working on the core values team, preparing to present their robot to the judges, and being one of the four members to assist the robot through its challenges at the table.

“I joined the team because it seemed interesting and I wanted to make some new friends,” Tarvin said.

FLL allowed for interactions and connections between fourth and fifth graders. Students don’t typically have these types of interactions between grades during the school day. FLL became a place where students made new friends and even broke out of their shell.

“I’ve learned that working together is really important because if we don’t work as a team some things can go crazy,” Tarvin added. 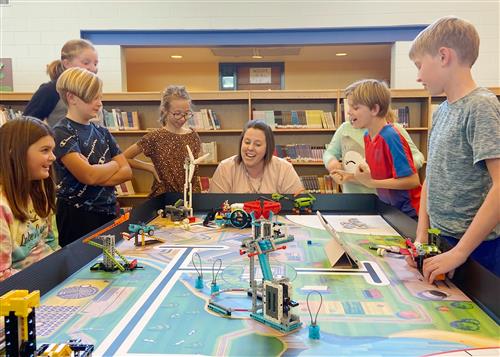 While only four students can be at the table to assist the robot through his missions; during practices the team would sit around to watch and contribute ideas. Everyone worked on the core values board, the programming, the innovation board, and so much more. While not everyone was the main worker on a project, everyone contributed to the finished product.

Tarvin is one of those students who worked on a little bit of everything. She originally started by working on the core values board. The core values team worked to determine what they value the most and what they will fall back on when things start to get hard. The core values act as a kind of reminder  on what to do when times are rough. Some of these goals were to get the missions done and work as a team.

After working and helping with core values, Tarvin spent time putting together the robot, who the team named Bart. The team spent about three weeks building Bart. They built him in chunks so that they also had time to work on their code.

Wyatt Beauchamp is the main coder on the team. Every single time the program ran, Beauchump spent time reconfiguring the code over and over until it was just about perfect. He spent time working on the code until the bitter end of the practice time before the third round.

This fall, SHES Rockin’ Robots traveled to Olathe Northwest for their FLL competition. Before the rounds started, teams presented their robots, core values board, and innovation board to the judges. They were given scores based on their construction, their presentation, and their quality of work.

“The competition went well, although we didn’t get the best place, I think we still did good,” Tarvin added.

The Rockin’ Robots did not walk away empty handed. They were awarded the Engineering Excellence Award. This award is given to the team with the most efficiently designed robot, an innovative project solution, and core values used in their team tasks.

“LEGO League is definitely something I would do again. I would recommend it to others too. I had a lot of fun with the team and at the competition and it’s something I won’t forget,” Tarvin said.

Hello! My name is Olivia Tarvin and I am a sophomore at SHHS! I am currently a reporter for the yearbook and stampedenews.net! I absolutely love writing and being on staff. When I’m not writing for SPUB, I’m in Band, camping, hiking, kayaking, volunteering, or spending time with the people I love!

To read additional articles from the most recent issue of the district magazine, please visit Spring Hill School Magazine Winter '23.