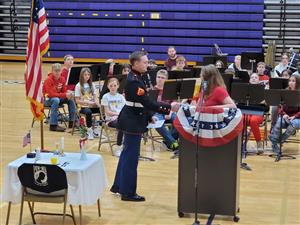 Our SHMS community came together to honor our local veterans on November 11th in our annual Veterans Day Assembly.

Groups contributing included local boy scout troop #289 as well as the SHMS band and Student Council. The scouts, led by Steve Sanford, posted and retired the colors. Directed by Mitchell Brumley, the band performed the Star Spangled Banner as part of the opening ceremony; later, they performed Valley Forge. The poem, “The Noble and Brave,” was recited by student Sophia O’Dell. Combined choirs from both Spring Hill and Woodland Spring middle schools performed America Depends on You and Me. Finally, Student Council, under the guidance of sponsor Lindsay Davey, provided all emcee duties for the assembly.

On behalf of the SHMS student body, student Zoe Tarvin presented a donation of $692 to the American Legion Cole-Smith post 350. This money was raised through a Stu-Co sponsored candy raffle and hat days where students paid for the privilege of wearing a hat each day, November 7th - 10th. The funds will be used by the Veterans Community Project in Kansas City, Kansas, which builds tiny homes for veterans.

However, the highlight of the assembly was the POW/MIA presentation, the “Remembrance Table,” given by American Legion members Jerry Williams and Lee Borgelt. The table is set to honor those who have served in America’s Armed Forces, especially those still missing in action (MIAs) and those held as prisoners of war (POWs).  This presentation is a powerful reminder of the sacrifices members of our military are willing to make to protect our country’s freedoms.